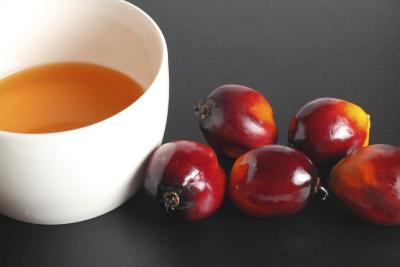 Palm oil soap making is very popular for very good reasons. This oil will add hardness to your bar and promote a stable/creamy lather all at a modest price. Just be a little bit careful as using too much within your recipe can produce an overly drying product. We would keep it at less then 50% of the oils used for hand bars and less then 30% for facial bars. Also, be sure to use a sustainable source of palm oil.

Here are some of the characteristics that you will find in your finished product when you try palm oil soap making:

Palm oil is occasionally referred to as the “vegan’s substitute for tallow” because it adds similar structural properties to the soap as tallow while allowing you to avoid the use of animal products if you so desire.

When making soap with palm oil, the glycerin yield is actually lower then with other soap making oils. This is because of its high percentage of free fatty acids. Despite the lower glycerin levels, palm oil soap making is still appealing because of the nice creamy/stable lather it produces and the hardness it adds to the soap. Keep in mind that if you use other oils in your recipe (which you likely will) the low glycerin yield will not be a problem as other ingredients will make up for it.

What’s a good use for palm oil in soap making? Many soap makers like to use palm oil for soap making to substitute portions of other oils in their recipe that add hardness to a bar but have negative effects on the skin when used in high percentages. A good example of this would be substituting a portion of coconut oil with palm oil. Coconut oil is great for adding hardness to soap, but when too much is used it can produce an overly drying product. You can substitute some of the coconut oil called for in a recipe with palm oil in order to make a soap that is hard, yet gentle on the skin because palm oil is a little bit less harsh then coconut oil. You still need to be careful though because, although it is less harsh, too much palm oil can be drying too!

Just remember that palm oil has a completely different SAP value then coconut oil, so the proper amount of lye needed to saponify the oils within your recipe will be altered if you make any substitutions. Obviously, it’s vital that you recalculate the amount of lye needed.

One thing we found out the hard way when first learning how to make soap is that the color of palm oil varies depending on the type purchased. Unrefined red palm oil is a deep orange and will alter the appearance of your soap drastically. If you’re looking to make a white soap, even a relatively low percentage of unrefined palm oil will produce a lemon yellow to pumpkin orange hue depending on how much is used. Refined palm oil will produce a whiter bar while still offering the same beneficial properties.

Be aware that palm oil soap making may slightly speed up saponification and cause your batch to reach a quicker trace. When using large amounts of palm oil just be prepared to move quickly if your soap begins to solidify in the pot.